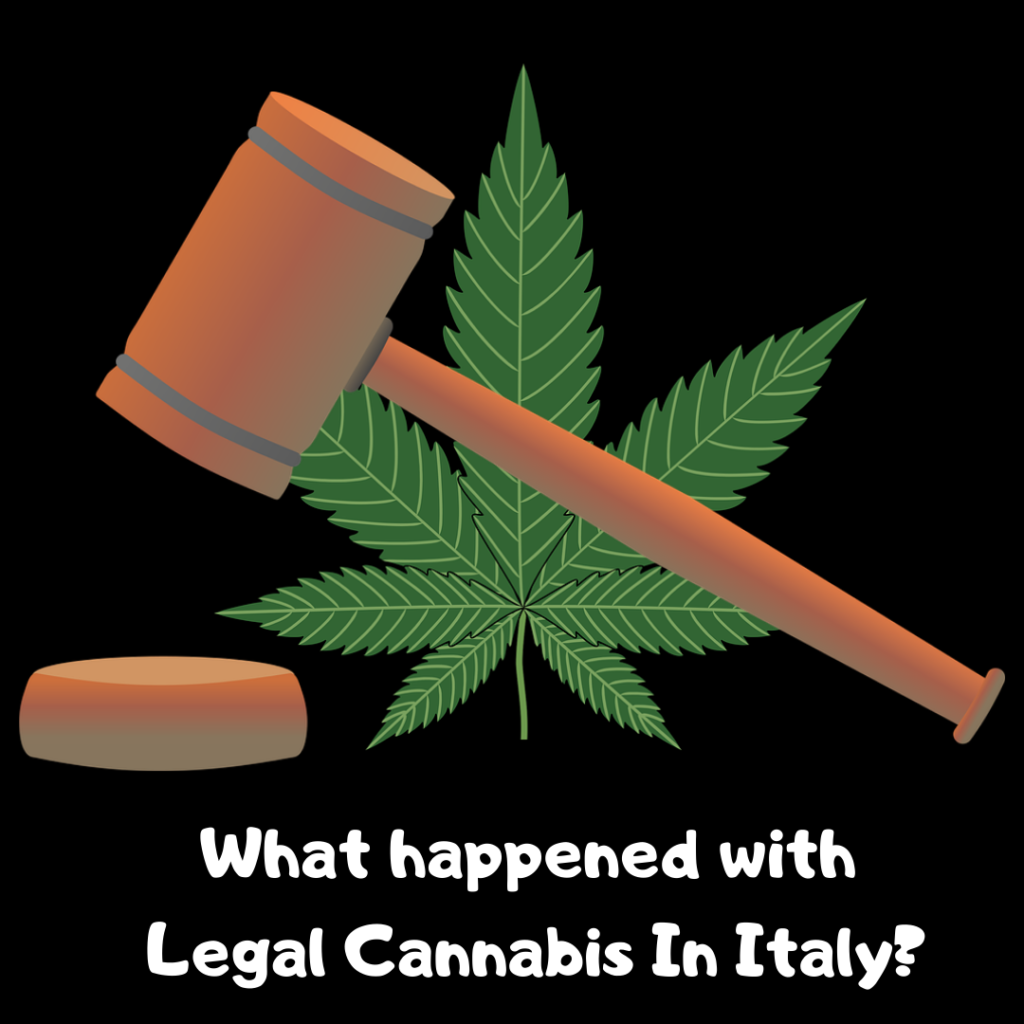 Is the sale of legal cannabis and cannabis derivatives now a crime under the Italian law? Italy’s top court seemed to be ruling that way, but things are not as they might appear at first sight.

About two weeks ago, a sentence of the Cassation Court (the highest Court for administrative law) was published, and we try to explain what the decision means for all those who’ve become used to buying and selling legal cannabis.

What does the law say?

The Cassation Court said that selling derivatives of Sativa Hemp – notably oils, resins, buds and leaves – it’s illegal in Italy. Only certain “agricultural” varieties are permitted under a December 2016 law that was designed to help Italian farmers grow industrial hemp.

The decision of the Court aimed to close a loophole in the legislation that left the door open to the marketing of so-called legal cannabis, strains that contain less than 0.6% of THC. So long as the THC content is below this threshold – and so long as it doesn’t end up as anything that can be eaten or smoked – the 2016 law said cultivators could grow legal cannabis without any special permission.

But the sentence comes with a huge contradiction when it states that legal cannabis derivatives are not allowed and must be filed as crime “unless they are free of narcotic effects”. It is not clear whether this definition is applicable to the low THC conditions on sale throughout Italy that make legal cannabis widespread in Italy. As a matter of fact, the existing 2016 law that enabled the market was pretty clear in stating that, if the THC content of cannabis products is lower than 0.6%, than it’s cleared by the same law as “free of narcotic effects”.

Since the 2016 law was passed, a number of legal cannabis shops, delivery services and even legal cannabis vending machines that sell legal weed and its derivates popped up everywhere across Italy, creating unexpected sales success even for the most optimistic forecasts.

Since buds, flowers and leaves could potentially be eaten or smoked, all legal cannabis shops in Italy have labeled all packages with legal cannabis-based products as unsuitable for human consumption and sold as technical or collectible items.

Shops also sell a number of legal cannabis edibles including soft drinks, infusions, candies and biscuits, that contain only fragrances or CBD, the substance in legal cannabis that has been claimed to have relaxing and pain-relieving properties. The court did not say that selling such products was illegal or limited in any way.

The wide variety of other legal cannabis products that are typically found in shops specializing in legal herbs, including cosmetics, crystals and clothing, are not affected by the latest ruling. Will these stores have to close?

In theory, the sentence leaves the police free to start seizing legal cannabis derivatives and fining the shops that sell them. Fortunately, the checks and closures of legal cannabis shops made after the publication of the court are in line percentage equal to those performed in the previous phase.

The application of the law is not clear, and leaves a lot of uncertainty on the Italian legal cannabis market. A range of products not listed by the judges can still be sold, however continuing to sell only other goods does not seem to be sufficiently profitable for all existing stores of legal cannabis.

The shop owners are understandably worried and have started to join forces and get together in associations to protect their investments and the legal cannabis culture of which Italy was one of the best world producers second only to Russia until the 50s.

Some propose and have already announced plans to launch a class action against the court ruling, which could put all the shops in the legal cannabis sector at the request of closures on decisions taken by police and law enforcement without actually taking into account what is the THC content that is sold in legal cannabis. “It’s like repressing alcoholism by banishing beer without alcohol” some shop owners shout… how not to agree with legal cannabis stores?

Well we just have to wait for the publication of the motivations attached to the Court sentence, which is something that the entire industry hopes will happen shortly and not with “classic” Italian law timings, normally very long.

In the meantime, everyone looks at the Italian Parliament and at the Italian politicians, which should be the true regulators of this trade, and could technically definitively clarify the legal situation by simply amending the law passed in 2016.

The entire Italian cannabis light industry, which now employs more than 10,000 people, and grew up to a financial value of 30 million Euros in just a couple of years since the enabling 2016 law, can just wait and see… and each shop owner will just have to hope that, in the meanwhile, their business won’t be randomly selected for seizing rides.

Privacy and Cookie Policy - Read More.
This website uses cookies to improve your experience while you navigate through the website. Out of these, the cookies that are categorized as necessary are stored on your browser as they are essential for the working of basic functionalities of the website. We also use third-party cookies that help us analyze and understand how you use this website. These cookies will be stored in your browser only with your consent. You also have the option to opt-out of these cookies. But opting out of some of these cookies may affect your browsing experience.
Necessary Always Enabled
Necessary cookies are absolutely essential for the website to function properly. This category only includes cookies that ensures basic functionalities and security features of the website. These cookies do not store any personal information.
Functional
Functional cookies help to perform certain functionalities like sharing the content of the website on social media platforms, collect feedbacks, and other third-party features.
Performance
Performance cookies are used to understand and analyze the key performance indexes of the website which helps in delivering a better user experience for the visitors.
Analytics
Analytical cookies are used to understand how visitors interact with the website. These cookies help provide information on metrics the number of visitors, bounce rate, traffic source, etc.
Advertisement
Advertisement cookies are used to provide visitors with relevant ads and marketing campaigns. These cookies track visitors across websites and collect information to provide customized ads.
Others
Other uncategorized cookies are those that are being analyzed and have not been classified into a category as yet.
SAVE & ACCEPT
Powered by